6V6 output tubes in a Wem Dominator MK 3? Yes, it can be done, and I am sure I am not the first person to do this. I can hear all the purist's asking: Why do you want to swap the output tubes? And what is it that you are looking for from this project? Well it is more of an experiment really to see if it changes the sound of the amp to a sound that I prefer from the original. I am looking to get a cleaner tone when the amp is at high volume. Of course it could change the amp in to a sound that I don't prefer from the original and it could also end up sounding the same as the stock valves. A lot of people write on the forums about how one type of tube sounds different from another but as we all know there are many more factors that influence sound in a tube amp. Changing the speaker for example is one very simple but effective way to change the sound of a guitar amp. The one problem I could see in this mod was that once I had drilled the larger holes out required for the Octal tube bases then a bit of metal work would be needed to reverse it back to EL84s if it didn't work out. I have a couple of Wem Dominators that I use for work which I have restored and modded. These amps are well gigged and are blasting out nearly 120 gigs a year. So, I decided that the older of the two would get the 6V6 tubes. This amp has already had the output transformer changed so it is far from original anyway.

When I first started thinking about fitting 6V6 tubes to one of my Dominators, I could see a couple of problems. The first problem I mulled over was: Would they fit in to the cabinet? 6V6 tubes are quite a bit taller than the EL84 tubes that are stock in the amp. The second problem was: Would there be enough room on the chassis to fit the valve sockets? So, a bit of measuring would be required. So, after a session with the ruler I worked out that they would fit but the sockets would have to be mounted underneath the chassis and the tops of the sockets would have to be flush with the chassis surface. To do this I would have to mount them on spacers.

The Tools Needed for this Mod

After taking all the valves out and removing the bottom board I drilled the holes so as the centre of the socket with the pin out fitted perfectly. Next, I had to make some spacers to bridge the gap between the bolt holes in the Octal socket and the chassis. I used 2 M3 bolts and 4 nuts to make these. After tightening them up the bases were solid. A good job well done. Now it was time to wire them up. Wiring them wasn't a big job and before I started I bent the pins outward half way up at 45 degrees. This allowed more space underneath. After wiring the sockets I brought it up on the variac just in case I had made any mistakes. It fired up okay with no problems.

What About the Bias?

The cathode bias recommendations for EL84 and 6V6 tubes seemed to very similar when I had a general read up, but I found when the amp had been on for a few minutes the 6V6 valves were running to hot although not red plating. The amp had a 100-ohm resistor for the cathode which is standard in Wem Dominator's. After a bit of trial and calculating I ended with a 270 Ohm resistor. This gave me just over 10 watts of dissipation. A 6V6S tube is rated at 14 watts of dissipation according to JJs datasheet so I had these at about 73% dissipation. You can run them a bit hotter though.

The moment truth! Would the chassis go back in without the tubes hitting the top of the cabinet? My measurements were correct. They fitted perfectly although they were a little taller than the EL84s.

What About the Sound?

The second moment of truth! At low volume the amp seemed to have a smoother rounder tone than before. The real results of this valve swapping project were when I used it on a gig. Normally a Wem Dominator is beginning to clip just before halfway on the volume. Past halfway it is going into distortion which is great if you are playing Blues and Rock. With the 6V6 valves I had three quarters on the volume, and it was still pretty darn clean. I use two Wem Dominators with a Morley ABC switching box to get a cleaner tone at higher volume. So now I have more volume and more clean tone. Should I put 6V6 valves in the other Wem Dominator? Much pondering on this subject is going on at the moment. Maybe after a few more gigs I will make up my mind one way or the other.

Conclusions for this Project

For all guitar players sound is a personal thing and we all as musicians have our opinions on what is a good sound in a tube amp and what is not. This project has by no means turned this Wem Dominator into a Fender amplifier and that was not the idea of this project. It has made the amp a little more versatile though in my opinion. Thanks for stopping by and taking the time to read this post. Please use contact page to get in touch if you have any questions. 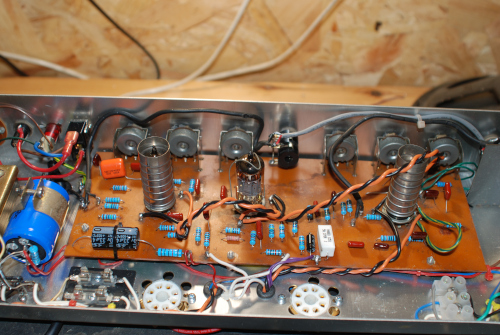 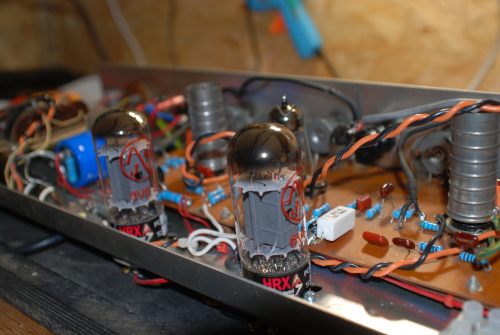