Having had a Marshall Haze 15-watt head lying around for the last 5 years I decided to do a major conversion to it. As we are all now in lock down due to Covid 19 I find myself with a bit more time on my hands. So, this Marshall head had a minor fault on it. I would run for about 5 minutes and then begin to sound extremely sick. As this was a PC board amplifier, I wasn't in a mood to fix it so it just got left for a few years.

Time for the Conversion

When I say conversion, I mean removing the PC board and using the chassis and transformers and rewiring the amplifier point to point. The challenge here is to use everything that goes into the amp that I currently have in stock after all we are in lock down and yes, I could order parts online but that would just be cheating. Nevertheless, it will be a challenge to find all the parts and I may have to use some second hand ones which goes against the grain with me but I can't have it both ways.

Marshall Haze 15 head Conversion to What?

After searching around on the internet, I decided on converting the lock down Marshall in to an 18-watt TMB. Here is the layout I decided to use. TMB stands for Treble, Middle and Bass. The 18-watt TMB layout uses EL84 tubes for the output stage. The Marshall Haze came with 6V6 tubes. These tubes will work simply fine with this layout. So, after removing the PC board from the Marshall Haze we are left with three ECC83 tubes for the preamp section and two 6V6 tubes for the output, a power transformer, output transformer and the chassis.

Stripping Down the Marshall Haze 15 head

Time to start removing the bits we do not need. First thing to remove is the PC board. There is another PC board, a much smaller one that has the speaker output sockets and fuse holder attached. This board also needs to go. All the pots are soldered into the PC board so once this was removed the chassis was bare. 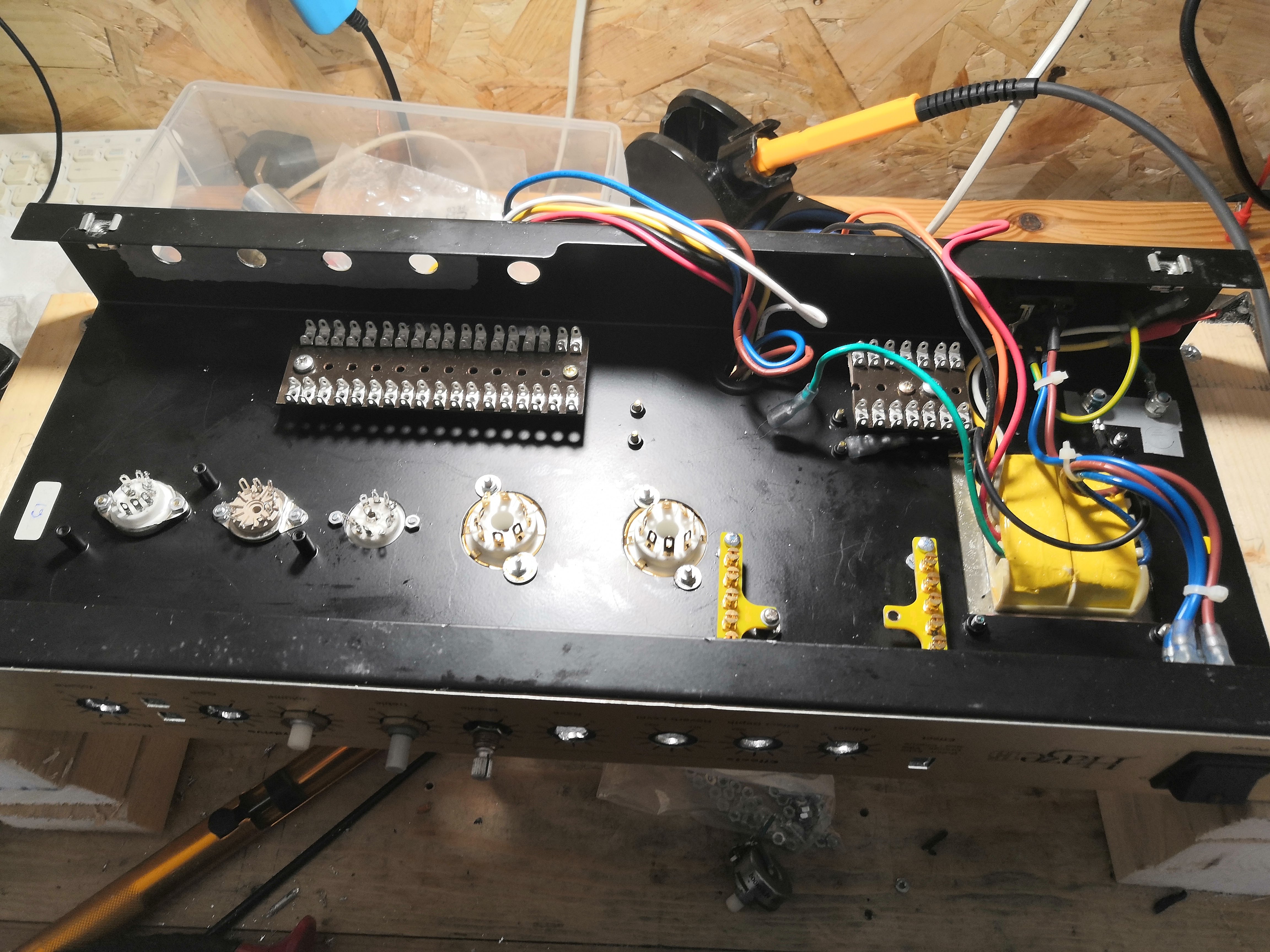 Time to Start the New Build

Next, we build up the power supply. I did some voltage tests before I stripped the amp to find what the HT voltage was coming from the Power transformer. It measured at 373 volts. The 18-watt TMB design shows the use of an EZ81 for the rectification. I did not have an EZ81 tube so I will be using solid state rectification. There was a chance now that the HT voltage could be higher than I perversely measured. The electrolytic caps that I had in stock were 450 volts rating which was enough when the amp was running. With solid state rectification there is a chance of an inrush of voltage when the amp is turned on which reduces as the tubes warm up. There was a possibility that the inrush voltage could 450 volts or higher. The layout that we are working to shows a 32uf capacitor for the first power node. This is quite low and the reason for this is because of the EZ81 tube. As we are not using that the EZ81 we can go a bit higher. I decided to add two 100uf 450 volts caps in series this would give me 50uf at 700 volts. Perfect and plenty of head room for any extra voltage gained from adding the solid-state diodes. I am not going to go into the reasoning of solid state and tube rectification. There is plenty of good info online and those guys are much better at explaining it that than I am and have a lot knowledge.

Adding the Components to the Tag Boards

Adding the components to the tag boards was a little challenging. These boards are a bit small and did not resemble the layout of the 18-watt TMB tag board. But remember we are using what parts we have. This is the lock down amp. There were one or two resistor values I did not quite have but I made them up wiring two resistors in series and one resistor should have 100 ohm and used 120 ohms on grid two off the output tubes. Should be close enough.

Adding All the other Components

All I needed now was some pots, jack sockets, wire and tube sockets. I was lucky with the tube sockets. The original ones were wired into the PC board, but Marshall had still cut the correct size holes in the chassis for them to fit to. So, I had my holes cut ready to mount the new ones. All the tube sockets were new as I had those in my stock. The pots came from amps that I had scrapped, and I had some nice CTS pots from an old Carlsbro PA. I also had a set of knobs from that PA too. I could not use the original knobs because the shafts on the original pots were too small. So, it was getting a set of Carlsbro knobs.

Wiring it all up

I made a few mild cock ups wiring it up but nothing that blew off the shed roof and none in the power supply of course as I check that wiring and double and triple check it. Just the odd wrong wire in the preamp stage which I later found out when powering it up.

Firing the Marshall 18 Watt TMB up for the First time

I used the variac to fire the amp up for the first time. I checked all the voltages before adding the tubes. With the tubes in the amp it fired up okay apart from the odd cock ups I mentioned previous. I sorted those and then moved on to the bias. This amp is cathode biased. The bias resistor in the 18-watt TMB design was 130 ohms. But as we were using 6v6 tubes this would be too low. The 6v6 tubes in the amp are JJ 6V6S. These have a power dissipation of 14 watts. After a bit of trial and error I ended up with a value of 180 ohms. this gave me a shade over 12 watts of dissipation, about 90%. They can be run at 100% in a cathode bias amp but 90% will work just fine.

Conclusion to this project

Considering I made the amp out of whatever parts I had, it turned out okay. A little crude but affective. the amp has that typical British sound associated with these types of design. Despite having the 6V6 tubes in it. Adding 6V6 tubes to an does not make it a Fender. It may alter the tone slightly, but it is the design of the amp that will ultimately decide the tone. 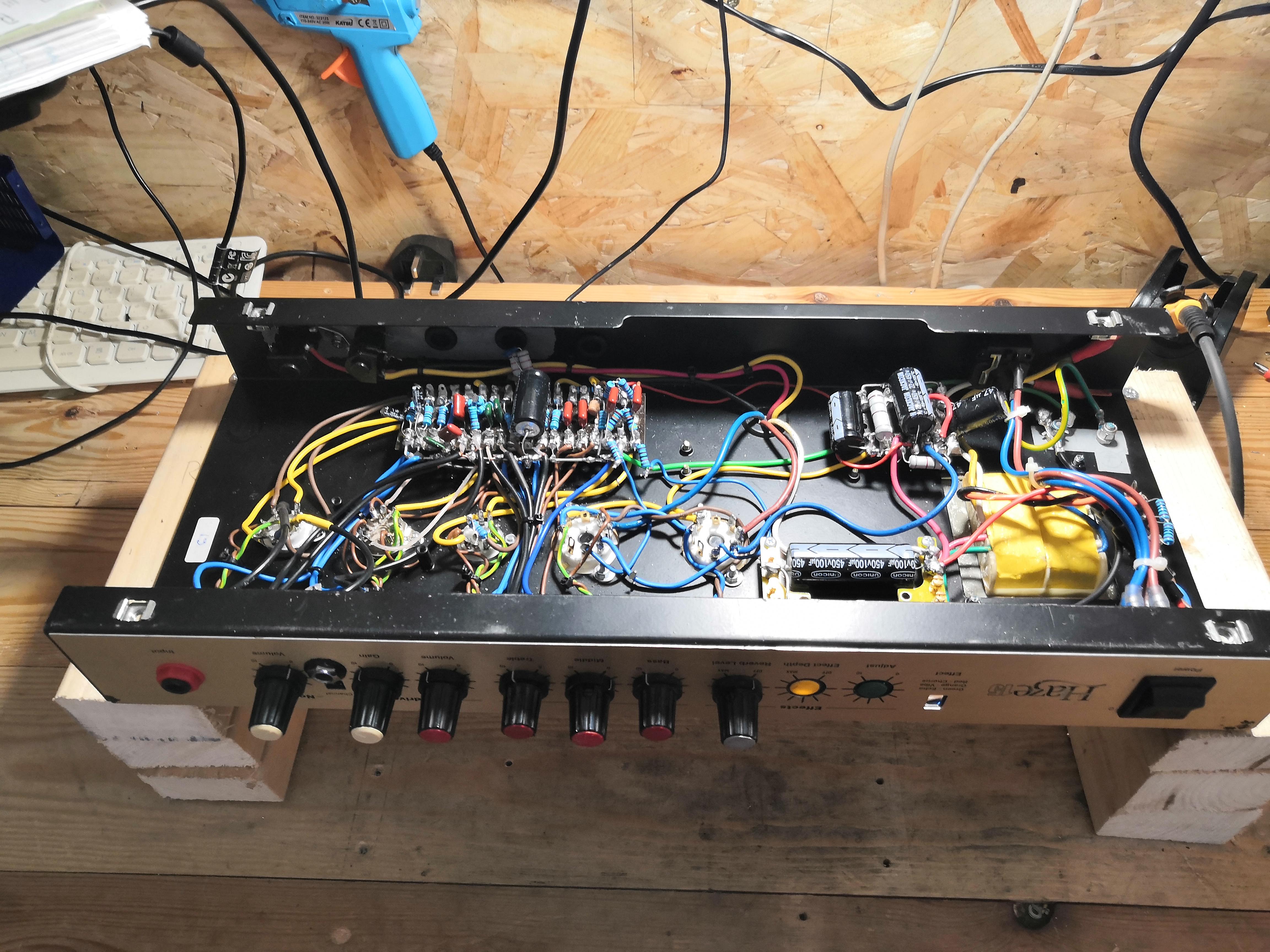 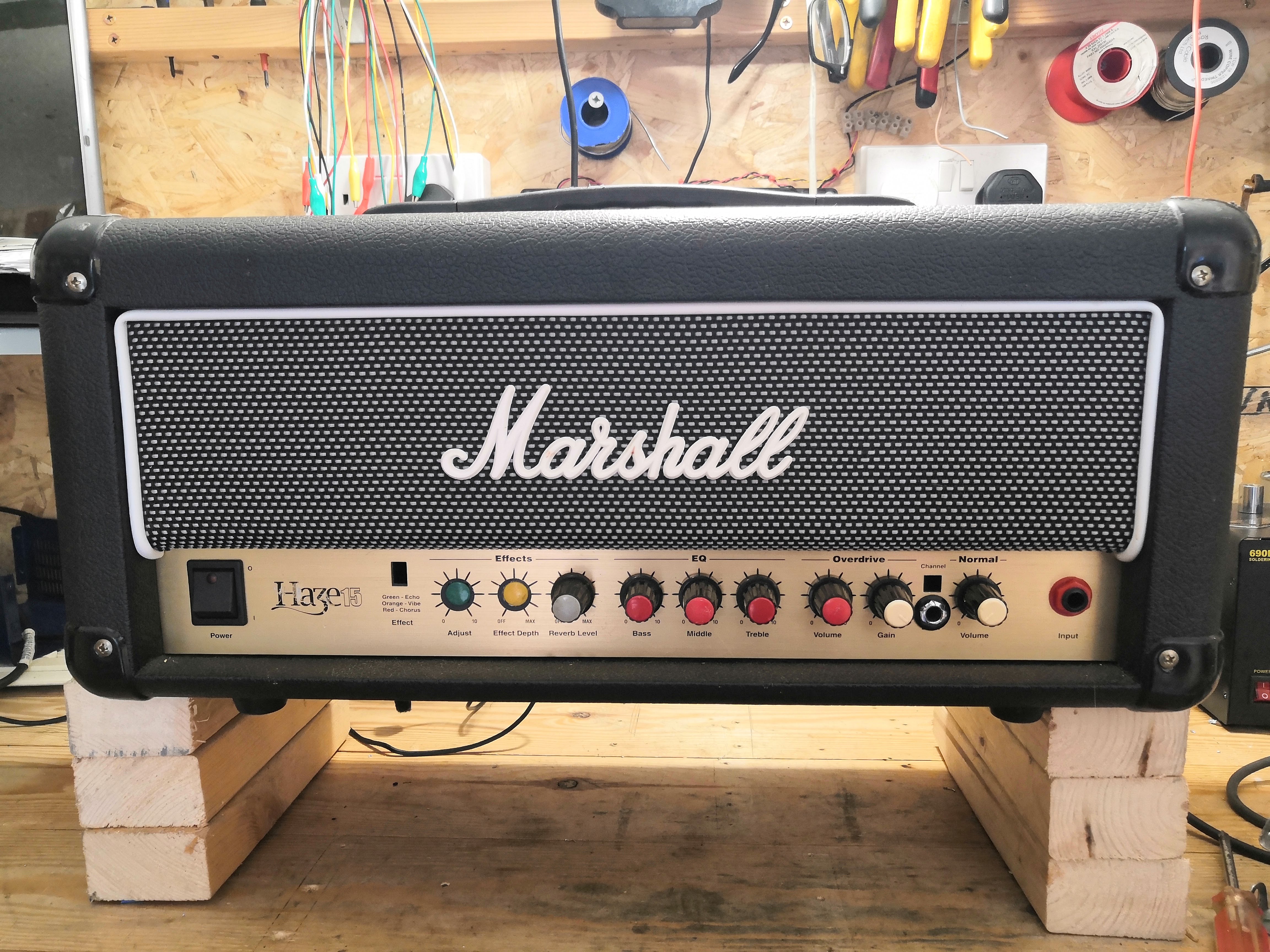